Note: this article has been redacted to fit the publishing requirements of this platform. For the full information, see the link at the bottom of the page.

Discord user “Konrad” aka “Konrad-MD” who appears on Identity Evropa’s “Nice Respectable People Server,” as well as several others that were leaked in March by Unicorn Riot, has been identified as none other than Kurtis Bailey Buckingham, of Woodbine, Maryland. 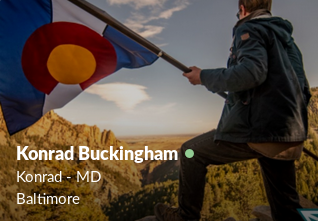 Identity Evropa, a white nationalist organization, is most infamous for its involvement in the deadly Unite the Right rally in Charlottesville, where antifascist Heather Heyer was killed by James Alex Fields Jr. Identity Evropa’s former leader, Nathan Damigo, is infamous for assaulting an Arab cab driver in an armed robbery, where he pulled a loaded gun on an innocent man for “looking Iraqi.” Identity Evropa also has within their membership an attempted Amtrak hijacker Taylor Wilson, as well as an attempted arsonist of a synagogue in Carmel, Indiana Nolan Brewer.

Kurtis attended the Leading Our People Forward conference as well as American Renaissance. He has also been involved in many recent public actions with Identity Evropa/American Identity Movement leader Patrick Casey, including at the infamous storming of DC Politics and Prose Bookstore. He has also participated in promotional videos for the white supremacist organization, including at one in Citizens Bank Park in Philadelphia.

You can read redacted info about Kurtis Bailey Buckingham here.