P!itD note: this article has been redacted to fit the publishing requirements of this platform. Big thanks to @405JR for getting the ball rolling on this fascist. For the full information, see the link at the bottom of the page. 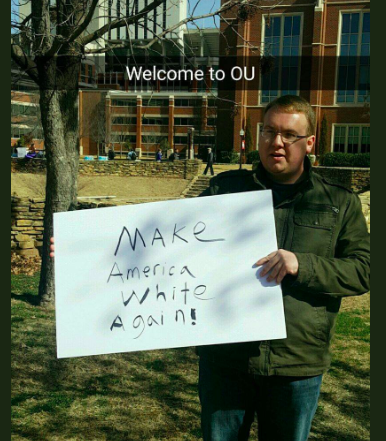 We’d like to introduce Interim President Dean Joseph Harroz Jr., the alumni and donors, the student population and the general public to the Identity Evropa/American Identity Movement member and OU student William Dennis Daniel. He first came on our radar as the lone counter protester to the Trump’s Immigration Ban, strangely, holding a sign demonstrating his support for Andrew Jackson and genocide of the indigenous people. But things start to unravel for him after that.

Clipped from the February 2017 OU Daily article about the student reaction to Trump’s immigration ban: 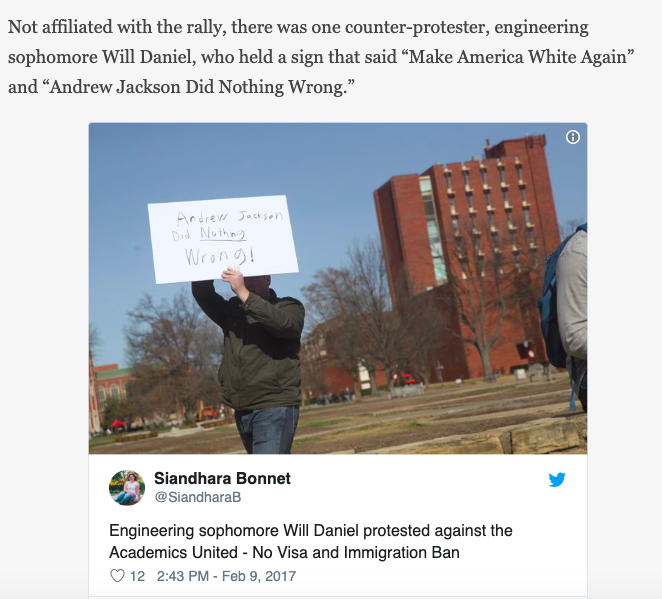 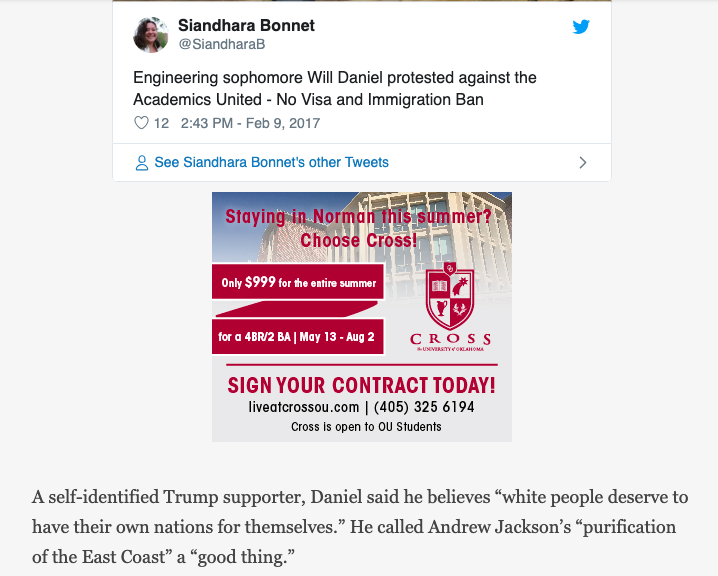 So we know William Dennis Daniel holds white nationalist ideas like achieving a white ethnostate and celebrating genocide. We also know he is an OU student and OU is in Norman, OK. Solid start for tracking down a fascist.

When local heroes Unicorn Riot leaked all of Identity Evropa’s communication platforms including their Discord and Slack channels (which resulted in their permanent ban from the platforms for white nationalist organizing), the information these white supremacists shared would be laid bare for the world to see. For background, according to the ADL and SPLC, Identity Evropa is a white nationalist group who was one of the key organizers for the deadly Unite the Right rally in Charlottesville in 2017 (more on that later!). Since the aforementioned leak of communication channels, IE attempted to rebrand as American Identity Movement but to no avail. The members are the same, along with the leadership and dues structure plus that whole anti-black, anti-brown, xenophobic, homophobic, traditionalist gender role, and anti-Semitic/anti-globalist ideology they promote. Most recently, AmIM disrupted an anti-racist author’s reading at a bookstore chanting “This land is our land” but the racists were quickly identified. The ensuing results of this identification and notification process includes the outings (and subsequent accountability investigations and firings) of Nazis in schools, the tech industry, the military, and other workplaces. We began to dig in, looking for mentions of Norman, OK. And we found some:

then some bragging posts about putting up white nationalist propaganda on OU department bulletin boards: 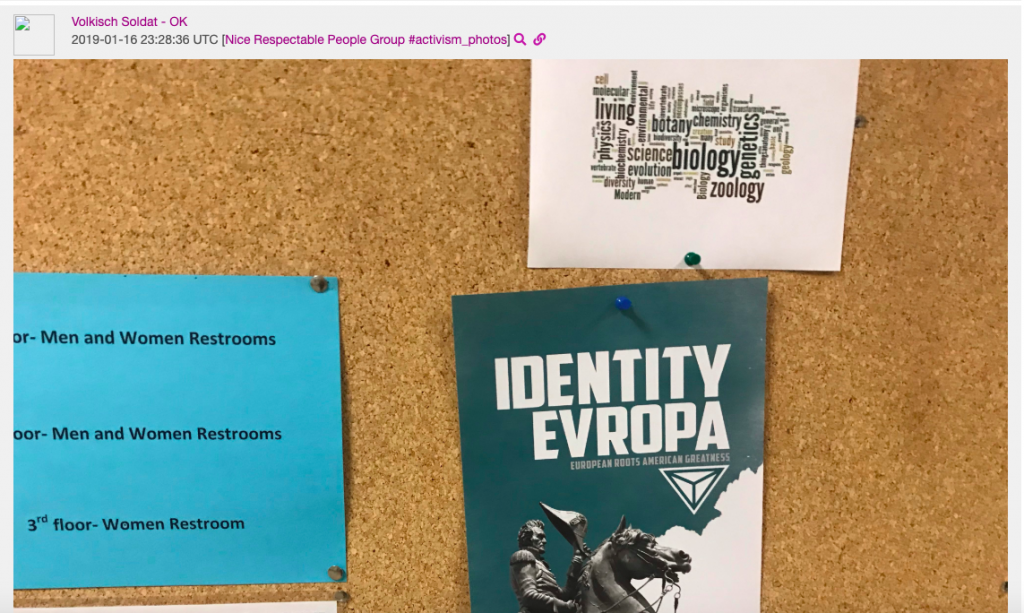 Other students noticed the hate speech, some removed it, others addressed it. Like former SGA President J.D. Baker said in this OU Daily article:

It’s also important to note that William Dennis Daniel posted the link to the same article above in the IE chats:

And then there was a casual mention from a fellow IE member Conway, who we’ll talk about in a few minutes: 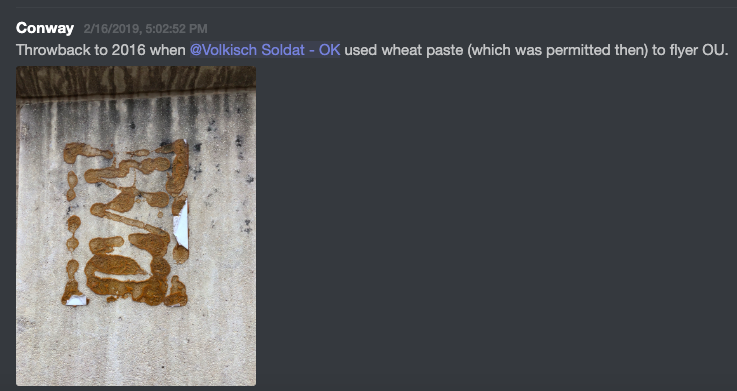 It becomes clear that William Dennis Daniel has been putting up white nationalist propaganda at OK colleges for a long time. He posted a collection of his (and others’) white supremacist propaganda on the IE communication channels. He was outed as the sophomore racist with the sign at the anti-ban rally in 2017, meaning that he was pasting up Nazi flyers in his freshman year without administration taking any action.

Area coordinator Conway posted this photo of IE members’ Day of Service at nearby Lake Thunderhead. Notice the similarities between the body type of man in the long cargo shorts and the body of the “Make America White Again” sign holder. 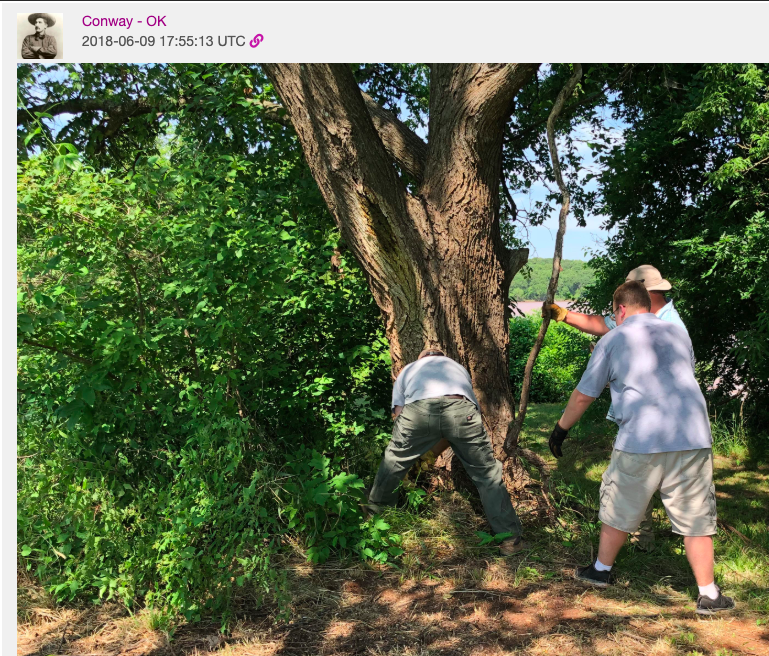 Speaking of Conway, who is that guy? There’s so much to him. His name is Judson Blevins and his well-crafted doxx based on his devotion to the OK flag  was how we were tipped off about William Dennis Daniel.

Conway, aka Judson Blevins was previously outed by Jared Holt, a reporter at Right Wing Watch. 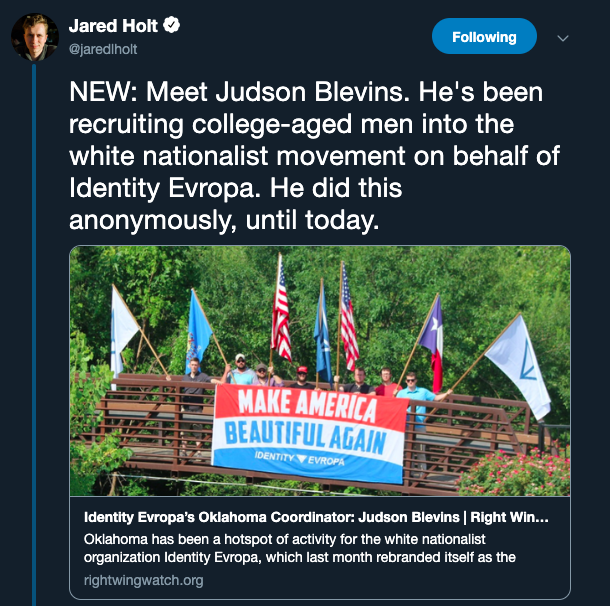 Full article, including further background on IE/AmIM, can be found at Judson Blevins – Right Wing Watch. 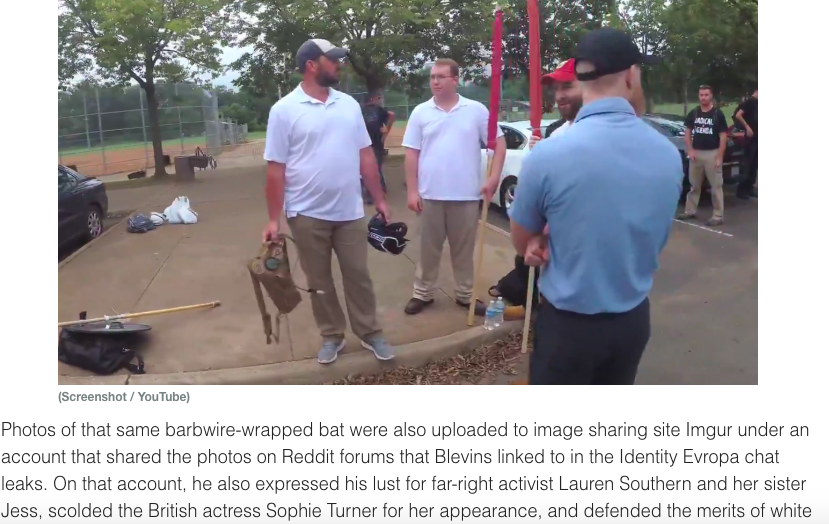 When intrepid researchers found and identified Judson Blevins in footage from the deadly 2017 Unite the Right white supremacist rally in Charlottesvile, VA, they paved the pathway for the other men in the footage to be outed.

Their really amazing analysis work can be found in its entirety on their Twitter or unrolled here.

They outline how they found Judson Blevins based on geographic, employment, and context clues about his life, including his trip to Charlottesville for the rally:

Then Unicorn Riot put all the chat room servers from the leaked white supremacist movement together and we looked for William Dennis Daniel’s screen name, Volkisch Solidat, in the millions of messages and we found him, all 196 messages from him. In the Unite the Right – Charlottesville servers from 2017, identifying himself as an actual Nazi:

Thanks to the diligent work of local concerned citizens, they were able to identify, connect then out William Dennis Daniel as the white nationalist at the OU anti-ban rally to a Unite the Right participant:

In the Charlottesville discord servers, in which members of Identity Evropa (now American Identity Movement) and other white nationalist groups planned the white supremacist rally where one Neo-Nazi drove his Dodge Challenger into a crowd of protesters, killing one protester and injuring dozens more, William Dennis Daniel callously assesses the situation and debases Heather Heyer:

For those out there who are doubting this is an accurate representation of William Dennis Daniel is real, *cough cough Interim President Dean Joseph Harroz Jr.* here is a side-by-side comparison of the pic from the OU rally and then the one from Unite the Right 2017 and then from the IE day at Lake Thunderbird:

From the reports we’ve heard from OU students, William Dennis Daniel hasn’t been shy about his white nationalist beliefs on the internet or in person. 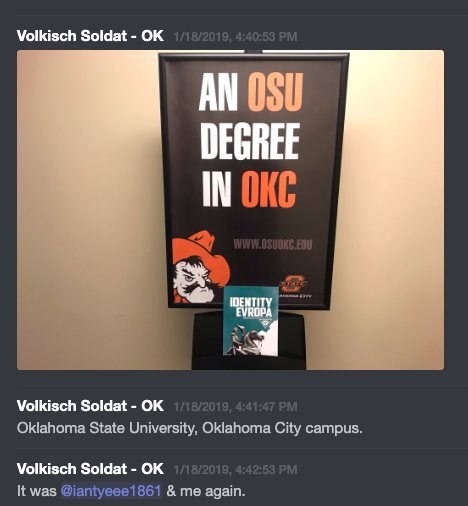 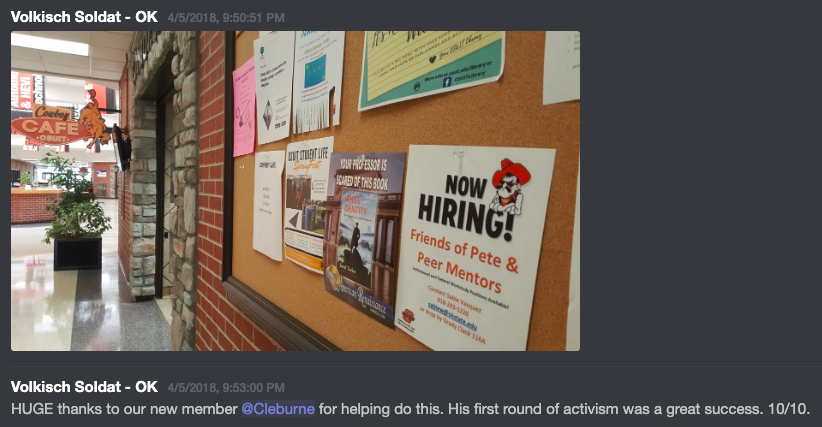 Through publicly available search engines we were able to verify that William Dennis Daniel is an OU student:

William Dennis Daniel Inherited his childhood home from his father after his death. He and his mother, Amelia Daniel own the home. It is valued at $100,940

Notice the facial similarities between son and father. We wonder what William Dennis Daniel, Sr, would have to say about his son. We wonder if he would be proud of him. We doubt it.

Let University of Oklahoma know that the white nationalist hiding among them, planning Nazi rallies, and plastering the campus with white supremacist literature is none other than sophomore William Dennis Daniel.

Politely ask Interim President Harroz, Jr, if this is the type of school culture he seeks to nurture and if William Dennis Daniel’s behavior violates the student code of conduct: