P!itD note: This dossier was compiled using publicly available information and was edited to meet the specific publishing criteria of this platform.

Ayla appears in the Charlottesville 2.0 Discord server, as leaked by Unicorn Riot the day after the deadly “Unite the Right” fascist riot in Charlottesville, Virginia two years ago. The server was many things: a planning hub, a scummy cesspool, a CW and a half for memes, plus a veritable who’s who of the white nationalist movement. A lot of people will (unfortunately) recognize “Ayla” from her shitty white supremacist “trad” blog called Wife With A Purpose. 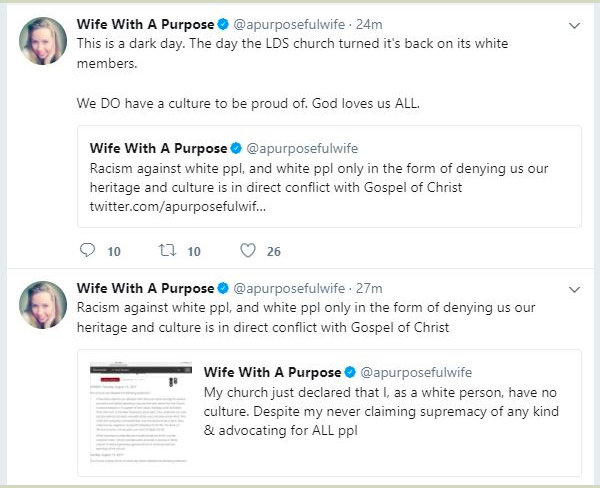 Ayla’s purpose seems to be getting exposed for being nazi scum, so let’s get into it.

As Wife With A Purpose, Ayla is well-known for being a white supremacist Mormon. She was active in the Charlottesville 2.0 server ahead of the fascist attack on Charlottesville two years ago.

Ayla posted this message to the server on the day of anti-racist activist Heather Heyer’s murder in Charlottesville:

Some context from the days that followed “Unite the Right” in 2017, from a fellow Mormon’s blog, Wheat & Tares, about how the Mormon Church was prompted to alter its statement about the tragedy due to comments made by Ayla:

Using the same username and profile picture (of herself and her son) as she did in the Charlottesville 2.0 server, Ayla reared her fascist head on the Identity Evropa server, “Nice Respectable People Group” as well. She had only one post available in the Discord chats recently leaked by Unicorn Riot:

The photo and first name was enough to identify Ayla Stewart as one of the earlier members of the fascist group (the Discord server is reserved for dues-paying members). Her question, pictured above, asks in September of 2017, “Why wasn’t I verified as an existing member?”, indicating she had been a member for prior to September 2017 when she made the post, possibly before “Unite the Right,” which happened in August of that year.

Ayla is 39, soon to turn 40 on March 21st. Ayla is married to Seth Davied Stewart, who is also white nationalist according to posts on her social media feed—their wedding anniversary is October 29. The fascist parents live in Ivins, Utah currently, owned or own a home together in Bristol, TN, according to public records. No surprise here: Ayla is registered to vote as a Republican. Her entire schtick is “tradlife,” which emphasizes traditional cis-heterosexual gender roles and is popular among fascist women in the US.

Ayla is known as “Wife with a Purpose,” and has assumed various aliases like Ayla Serenememoon, Erin Ayla Donnelly, adorablemom, and adorableayla on various social media accounts. She has (at least) two Instagram accounts: a primary and what seems like sort of a backup account. 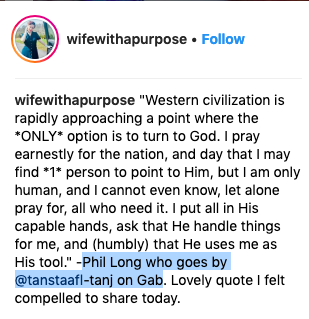 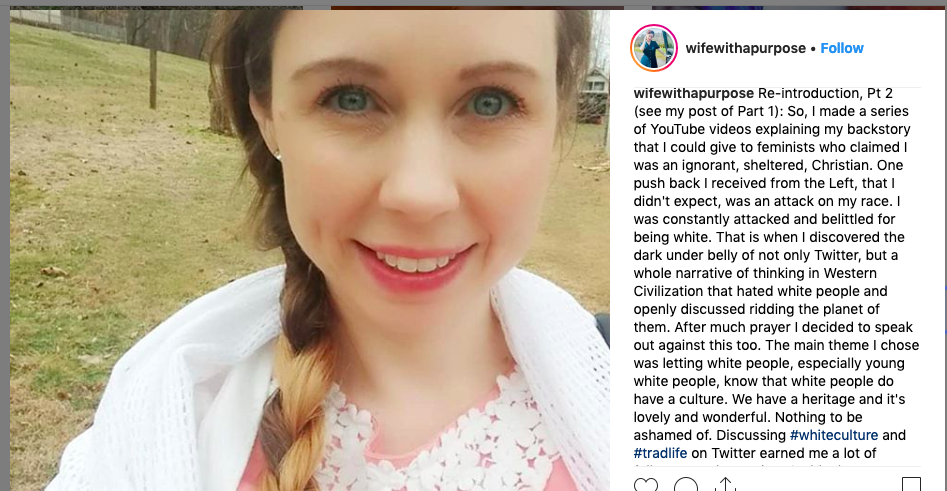 Instagram, which is owned by Facebook, allows fascists to spread propaganda all over its platform. Instagram faced scrutiny last year when it was revealed the platform was allowing a neo-nazi group to sell clothing on the platform.

Our researchers also came across Ayla’s Etsy shop after noting the link she provides to it on her Instagram. On Etsy, she uses the name “Mrs Ayla” to sell from her shop called (you guessed it!) Wife With A Purpose. She mostly sells really, really bad fascist “art,” if one can even call it art. Whatever it is, it’s probably in violation of Etsy’s policy against selling “hate items” or items that glorify violence to sell fascist crap, and that “tradlife” garbage may as well be covered in swastikas. You can flag her account and her items for sale here.

Ayla is almost definitely currently using Facebook, but our researchers haven’t been able to track it down (it’s most likely private). They did, however, find one of her old Facebook accounts, which she claims is now inactive.

Her website is wifewithapurpose dot com, also displays the same photo of herself and her son that Ayla used in fascist Discord servers. She clearly feels she has absolutely nothing to hide. Which seems like a mistake.

Ayla is a known fascist who has insinuated herself all over popular social media platforms in order to recruit more violent assholes to fascism and to grift them. She  deserves no platform whatsoever.