Skip to content
Peter Earl Diezel lives in Indiana and has propagandized for the Neo-Nazi group Identity Evropa, newly rebranded as American Identity Movement (AIM), of which he is a very active and visible member. He also seems to be a supporter of a much more militant and violent white supremacist group called the Rise Above Movement (as we’ll show below). The Indianapolis branch of IE seems to have become inactive as of 2018, so Pete often also visits Chicago to spread their hate. He’s been on a lot of people’s radar for quite some time, even before the IE Discord leaks from Unicorn Riot, so let’s get to know this guy.
Identity Evropa activity
A glance at the posts by username “Piet Dietzel” (as well as others such as “Mick – IL”) in the Discord logs under #activism_photos reveals much of Pete and his associates’ propaganda efforts across Indiana and Illinois, posting not only Identity Evropa materials but other typical Nazi bullshit.

Peter’s personal Twitter account is @scubaslayer13. On March 11, 2019, he changed his profile photo from a statue to what we assume is a photo of him as a toddler, and his background photo was changed to a shot of the newly-rebranded American Identity Movement’s flash photo-op in Nashville, TN from March 10th. In a close-up of another one of these group photos, Peter can be seen standing behind their main banner.

On Sunday, August 5th, 2018, three Identity Evropa members were posting racist fliers around Logan Square, Chicago. They approached members of a local socialist group tabling just outside the farmers market. One of these men, Peter Diezel, aggressively threw some of IE’s propaganda onto the socialists’ table, and a brief confrontation ensued. The two other young men he was with looked clearly uncomfortable about his belligerence. They seemed unsure if this is the right approach they should be using to spread the hateful ideology they like to call “identitarianism”, which is a manipulative way to say “white supremacy”. They were run out of there, Pete’s photo was snapped, and his face appeared on fliers warning the community about him and his group.

During the summer of 2018, Identity Evropa activity in the Chicago area, which had been relatively sparse in the previous year, dramatically increased. In addition to fliers with IE branding, other fliers were also spotted and removed by locals: notably, those promoting notorious white supremacist ideologue Jared Taylor (whose racist ideas inform the ideologies of past and current neo-Nazi groups, especially Identity Evropa), and fliers with the white supremacist dog-whistle slogan “it’s okay to be white”.
They have also done banner drops in Chicago with other out-of-state members. On a Saturday in late January 2019, a group of IE members joined their CEO Patrick Casey for a demonstration outside City Hall (closed on the weekend) on LaSalle Street (where most office buildings and other businesses are also closed on weekends). This was played up in their online propaganda as a major demonstration against Chicago’s status as a sanctuary city for undocumented immigrants.
Peter’s hate
Pete and friends like to pretend to be nothing more than an innocuous group of conservatives who are unfairly labeled violent, racist, and white supremacist, which is a pretty familiar tactic among fascists. In much of their social media and internal chats, they like to point out how many Americans, even people of color, agree with their anti-immigration stance and other views. This is part of their strategy to normalize themselves in mainstream US politics (which is bad enough on its own without the help of outright fascists getting involved). However, Pete, like many of his fellow fascists, has shared anti-Semitic content on his personal Twitter (@scubaslayer13), as well as on Discord. In the below photos, the (((echo parentheses))) is an anti-Jewish dogwhistle:

We have much more evidence of Peter’s anti-semitism, racism, and Holocaust-denial archived here:

As much as Identity Evropa / American Identity Movement tries to get away from its Neo-Nazi roots, let’s remind everyone that its membership and supporters can’t get away from it. Peter Diezel has been feeding himself this shit for some time now, and a search through the Identity Evropa Discord logs (AKA “Nice Respectable People”) will reveal more of the same.

Peter and the @Chidentitarian Twitter account
In June 2018, the Twitter account @Chidentitarian was created to serve as the conduit for Chicago-area “identitarian” activity and to antagonize Chicago leftists. Pete has helped run that account, as well as his personal account at @scubaslayer13.  Both accounts often have an arrogant tone about them, especially when trolling leftist accounts. During the weekend of Identity Evropa’s 2019 “Leading Our People Forward” conference in Kentucky, as their Discord logs were released, the @Chidentitarian Twitter account went private – around March 8th. Are they trying to dump their history of incendiary tweets linking them to Peter? Was there a fallout? Are they rebranding the local branch for Maximvm Optics? Who knows!

Peter (and/or maybe also his buddy Mick?), using the @chidentitarian account, has often trolled leftists and local journalists for what they see as false or inaccurate reporting and portrayals of Identity Evropa. For example, they really don’t like it when people equate the IE logo with Nazi swastikas or call IE any kind of hate group (Nazis, white supremacists, Alt-Right, etc). The phrase “optics cucks” has been used to mock Identity Evropa’s apparent obsession with maintaining a clean-cut image to distance themselves from more obvious versions of fascists and white supremacists. Fascism is fascism, no matter the variations in ideology, group structure, clothing, propaganda, tactics, and branding. We know who these guys are.
After Pete’s face was outed to the community in August, the @Chidentitarian account has mockingly tweeted about waiting for Pete’s dox, posting photos of him posing in front of fliers warning the community about him and Identity Evropa.
When community activists were linking Identity Evropa with other fascist groups like the Proud Boys, Patriot Front, and assorted MAGA chuds, whose members had also been active in Chicago over the past year, the @Chidentitarian Twitter account sent this out to some of those guys:

In a tweet from December 2018, Pete issued a correction about his identity: “You misspelled my Twitter handle and legal name. It’s @scubaslayer13 and Peter Diesel. Do your worst.”

Since Peter was kind enough to give out his real name, we went about putting together a dossier on him. With his last name and his proximity to Indianapolis, running his name through address databases was easy-peasy. We were able to determine that he indeed lives near the state capitol in Indiana. Also his date of birth tells us that he’s 33, which is about the time to really sit down and think if you want fascism to be a part of your legacy.
He is a licensed EMT and firefighter in the state of Indiana. He was in the US Navy in Virginia and has worked for them as a sonar tech. A current donor to the Athenaeum in Indianapolis, where there’s a German-American club, Pete has also written white nationalist propaganda on the chalkboard at Coat Check Coffee, inside the Athenaeum.

On Sunday, September 9th, 2018, Peter and friends were spotted by residents of Logan Square, Chicago, putting up more racist propaganda. Peter stopped a couple times to mockingly pose next to posters bearing his face, letting the community know he’s a violent white supremacist (from the incident in August)… Tweets went up on @Chidentitarian right away, where he tagged the farmers market account. 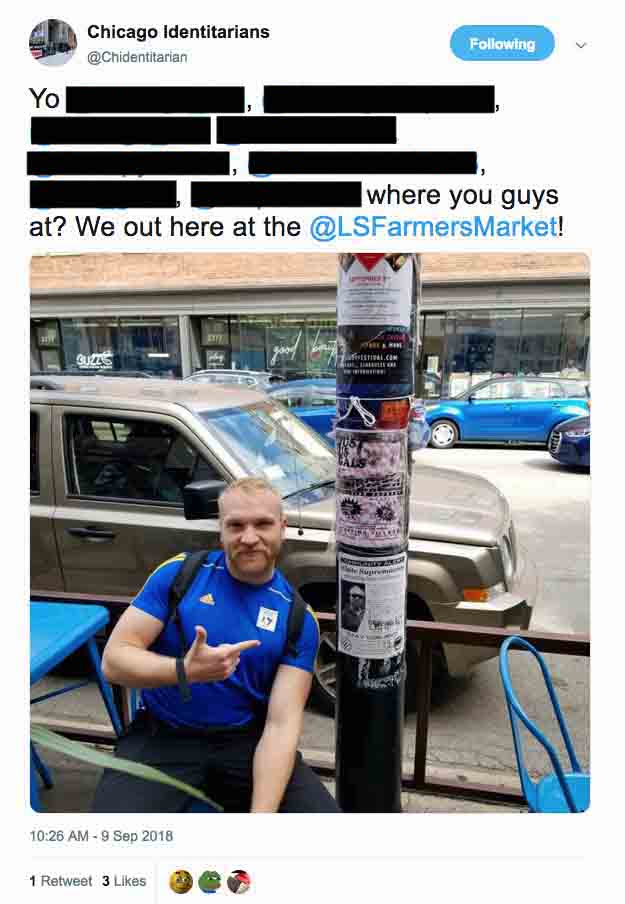 Peter Diezel, the Rise Above Movement, and Neo-Nazi violence

The stickers that Peter and his friend put up at the farmers market that day were from a Neo-Nazi clothing brand called Right Brand Clothing, which was started in January 2018 by the militant white supremacist hate group Rise Above Movement (RAM).

RAM members, like Identity Evropa, participated in the infamous Unite The Right gathering in Charlottesville in August 2017. We are, by now, all familiar with the tiki-torch march, the brawls, and the murder of our comrade Heather Heyer. There have already been several fascists convicted, including James Alex Fields, who drove his car through a crowd of counter-protesters. There are currently 4 members of RAM who are facing charges related to their participation in the violence in Charlottesville. As of last fall, their clothing brand was raising money for their defense. Here’s more info about RAM:

Looks like the “Right Brand Clothing” website is finally offline. However, the fundraiser for the “Cville4” RAM Nazis is still active (or is it 8 of these Nazis facing jail time?). Another white supremacist clothing store called “Our Fight Clothing” is now selling t-shirts online to raise money for RAM’s legal defense. Members of fascist movements have been whining for the past 2 years that the blowback from Charlottesville is a form of oppression against them. Nah, it’s the consequences of hate. Whether you get shown the door by the community, the state, or through your own incompetence as a human being, the lesson to learn as a fascist is that you are bound to lose.

Our Indiana boy, Peter Diezel, appears to still be on board with these violent RAM militants. This seems in blatant contrast to the clean-cut and “nonviolent” optics that Identity Evropa (and its successor American Identity Movement) spend so much time cultivating. What this looks like is a member of American Identity Movement openly supporting one of the Amercian fascist movement’s most militant and violent elements. Is that the kind of thing that Patrick Casey’s brand of “identitarians” approve of? Maybe it is, but either way, we have always known that there is no such thing as “nonviolent” white identitarianism.
Speaking of Charlottesville and James Alex Fields… That conviction went down back in December 2018. There was all kinds of chatter about that on IE’s Discord logs as well as IE members’ social media accounts. Peter Diezel had some feelings about it:

When Peter Diezel isn’t being a Neo-Nazi hatemonger, we’ve discovered that he frequently enters long-distance races, having run several 5Ks and marathons. If you’re in Indiana, you may see him jogging somewhere on the famous Monon Trail (Indianapolis segment).
We are not here to offer any kind path to redemption for this guy. We are here to show the world who he really is and the path of hate and manipulation he’s chosen for himself. This dude is toxic AF, like all the other fascists we have discovered lurking around and actively trying to bring down our beautiful communities of diversity and inclusion that we are building. There just isn’t any room in our communities for racist, sexist, anti-Semitic, violent white supremacists like Peter Diezel, the ashes of Identity Evropa, the birth of American Identity Movement, or any of the numerous incarnations of the same old fascist bullshit we’ve always been defeating and will always defeat.
As of this writing, the @Chidentitarian Twitter account was still set to private (we have a hunch they’re doing a mass purge of their account so they can try to save face and keep manipulating people about their intentions). However, we leave you with this old post from the archives, which may give folks a clue about the mentality of these fascists:

Peter Diezel works for Seals Ambulance Service, which can be reached at 317-541-1200. Ask them why they are harboring a Nazi.